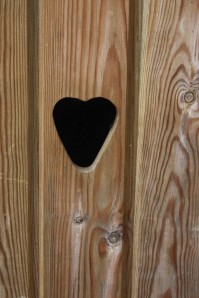 I like cheese. I especially like strong French cheese and one of my favourites is Epoisse de Bourgogne. It’s got a soft ripe paté (that’s the technical name for the runny bit in the middle) and a moist wrinkled rind flavoured with Burgundy marc. It’s particularly delicious on plain digestive biscuits  — the slight malty sweetness of the biscuits complementing the milky tartness of the cheese. The trouble is it’s rather strong smelling, and the rest of my family have either got more sensitive noses or (and I’m inclined to thing along these lines) less discerning palates, because they complain that it STINKS.

The first complaint came soon after the supermarket visit, as the car gradually filled with the smell of old socks. Even though it was a cold March morning I was commanded to open all the windows to let in fresh air.

The second complaint came when the fridge began to honk. I was instructed, in no uncertain terms, to get rid of the offending item. Put it in the shed I was told. So I did. Luckily we have two sheds: the usual one full of push-bikes, lawn-mowers and tool-kits, hidden down at the end of the garden, and another, a small upright construction shaped like a sentry-box, just outside the back door. It’s got gloves, trowels, secateurs and a few other small implements inside. It’s rather twee, with its cute heart-shaped cut-out hole in the door, but it does the job. And it was just the place to hide the cheese near enough at hand for when I fancied a bit, yet outside enough to calm my nasally-challenged family.

It was several days later that I thought I needed a little savoury something-or-other, after a glass of wine or two at the end of a hard day. I retrieved the unopened box, fashioned out of paper-thin wood with its discrete black and red appelation contrôllée label, and I carefully plucked open the flimsy plastic wrapping. The air suddenly clouded with the wonderful thick aroma and I eagerly scooped two dripping spoonfuls onto my wholemeal biscuit. Mmmmm, it melted in my mouth. You’re not suppose to refrigerate runny cheeses anyway, the weather had been cool-to-mild, and by now the texture was perfect. My nostrils quickly filled with the heavy scent of creamy cellar-fermented curd with that rich aftertaste of wonderful Burgundy marc. Another, I thought, yes. Delicious. And another, and another. Despite the strong flavour, there is nothing cloying about Epoisse, every mouthful was as succulent as the last.

Now, as an aside, I have to admit that I’ve been thinking about my eyesight recently. I can’t seem to focus quite so close, and I think I’m going to have to get reading glasses. I thought perhaps my migraines were something to do with eye strain. I’m lucky though, I don’t get the brain-numbing thunder shocks of pain experienced by some people, I just get a wide arc of flashing wiggly lines across my vision for twenty minutes or so, then I’m back to normal. I’ve often wondered whether these attacks were food-induced. So when I caught the familiar wiggles out of the corner of my eye I fancied that the cheese, a no-no for many migraine sufferers, might be a cause of mine.

But no, it was all right, the wiggles weren’t in my eye…they were in the cheese; all around the edge of the cheese in fact, where the slightly wrinkled rind sat against the pale wooden container. They were maggots — white and wriggling. At least 50 of them. And judging by their size, about 7 or 8 millimetres long, and their plump appearance, they obviously loved the cheese too.

Suddenly all became clear—the large mottled grey blow-flies I’d seen settling around that cute heart-shaped hole hadn’t been basking in the morning sun after all. They’d been drawn irresistibly to the subtle ammonium scents that I thought were part of the natural aroma of this delicacy, but which were identical to the subtle ammonium scents given off by carrion as it reaches a state of semi-liquid putrescence.

The idea of nervousness bringing on ‘butterflies in the stomach’ took on a slightly more sinister form for a few moments as I held my breath and clutched my belly. Was anything moving down there? Several silent moments passed whilst I thought of what to do next. Should I stick my fingers down my throat to vomit it all up? Should I take some laxative to expedite emission at the other end? Should I seek medical advice? In the end, reason got the better of me, I drank another glass of red wine, well, quite a few glasses actually, to drown the little blighters, just in case.

It took several days of soul-searching and stool-watching to reassure myself that I had, indeed, escaped some foul gastro-intestinal infestation.

I now had to grapple with the wider consequences of the situation. Did I keep this to myself, or reveal it to my family. Well, I’m a blabber-mouth, so I told all. Big mistake. Having been interested in insects from boyhood, and now rather reckoning myself something of an expert, I felt a little foolish at my greedy error of judgement. The irony wasn’t lost on my family either. So now, whenever I’m pontificating about bugs to my children and their friends I’m constantly asked ‘Tell them about the cheese, Daddy’. And I have to confess all. There’s no escaping. Afterwards, they all stare up at me with an expression that’s half way between paralysed revulsion and bewildered astonishment that I’m still alive. Then they all fall about laughing. I am never going to live this down.

This entry was posted in General Stuff and tagged cheese, Epoisse, migraine, sheds. Bookmark the permalink.