How to be a curious entomologist

Scroll down to the end of this page for some useful links to on-line how-to instructions, commercial suppliers of biological equipment, societies, recording schemes and identification guides. I’ll update this page occasionally to add new links and information.

This was the first workshop, in June 2012, for more information have a look at the report of the second workshop, 29 July 2012. The third workshop is scheduled for Ladywell Environment Education Centre, 13 October 2012.

Beginning on Saturday, 30 June 2012, at The Creekside Education Trust in Deptford, and funded by the London Borough of Lewisham’s Rivers and People Project, I’ve started leading a series of ‘How to be a curious entomologist‘ insect workshop/ seminars. These are aimed at the complete novice, someone who might be generally interested in wildlife, perhaps even more specifically in birds or plants, but who have only really regarded insects as pretty flower ornaments or small strange buzzing critters. 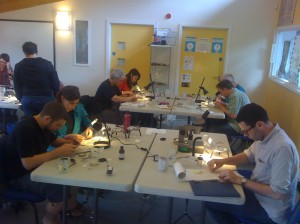 The idea was very straightforward: teach people some of the basic methods of finding, catching, killing, pinning, carding, mounting and labelling insects to form a simple insect collection.

So often, I am asked to identify an insect from a description, or a slightly fuzzy photo. It’s usually good fun and I hope I can at least identify to family or even genus level. But identifying something to species usually requires more than even the best-lit, most-clearly-focused, highest-definition digital image. It usually requires a specimen, to examine under a microscope, to look at individual bristles on individual legs.

Collecting insects rather went out of fashion during the 1970s and 1980s, partly led by the conservation instincts of butterfly- and bird-watchers who saw butterfly collecting as little better than stamp-collecting, and egg-collecting as the thoroughly disreputable activity of a criminal underclass. ‘Serious’ entomologists studying small-fry like flies, beetles, plant bugs, ants, solitary bees and wasps, ichneumons and sawflies, were sometimes made to feel uncomfortable wielding insect nets in public places, as if they were doing something underhand.

There has, since, been some redressing of the balance, and given that there are over 25,000 insect species in Britain alone, the collecting of specimens for identification is now much more widely recognized as a legitimate and necessary part of biological study. I was pleased to be part of a group who entirely rewrote what was once for the Code for Insect Collecting, but which has now transmogrified into the Code for Collecting Insects. There’s a subtle, but important difference in the title — stamp collecting versus scientific inquiry.

The title of these workshops was partly inspired by Simon Barnes’s How to be a bad birdwatcher, the key point being that you do not have to be a good (or expert) birdwatcher to take fascination, awe, understanding and delight from watching birds. If you look, you will see astonishing, though commonplace, things. My aim was to show that studying insects does not have to be the preserve  of scientific experts or even dedicated amateurs. Anyone can look at insects, and make useful and valid contributions to the citizen science of entomology. And I like the word ‘curious’, meaning, as it does, not just ‘a bit odd’ or ‘slightly eccentric’, as indeed are many entomologists, but also ‘fueled by curiosity’.

These workshops are aimed to give new-comers to insects a chance to understand just how and why to collect specimens, and what to do with them

— how to kill the insects being collected

— how to pin or card them

— how to mount them in museum style

— and how to validate them with credible and valuable data labels.

Finally, there are the problems of storage, until there is the chance to identify the specimens, offer them up to recording scheme organizers, local or national experts, or take them to museums to compare with reference collections.

As a follow-up to the workshops, here are some links, further reference materials and ideas. There is no way that this list can be exhaustive, but at least it can be a starting place should people want to go further.

HERE ARE SOME LINKS AND FURTHER INFORMATION

The basics of collecting, pinning, carding, labelling and curating a collection are pretty well covered in plenty of books, a few sources are available on-line, especially in the USA:

This is from the University of Arkansas

And this from the University of Minnesota.

This rather quaint book, How to make an insect collection, is nevertheless very useful.

Much equipment can be home-made. Here is a list of easy and cheap alternatives to many expensive items. When starting out, entomological pins are important, finer, better quality and corrosion-resistant compared to sewing pins. A good hand lens (x 10 magnification is fine) will also be a great help. Here’s a guide to getting a lens. However, for a full range of everything from micro-pins to research-quality microscopes, there are several commercial suppliers including:

Some of these companies also sell microscopes, otherwise there are:

To start, a stereomicroscope may seem a bit of a luxury, but cheap models are available for around £80. The most important point is low magnification rather than high: x10 or x20. A stereo-scope with swiveling turret, allowing you to swap easily between x10 and x30 is perfect, starting at £100-£150. A zoom microscope giving a range of about x10 to x45 is a delight from £350. Here’s a brief guide to buying a budget stereomicroscope.

Identifying insects can be tricky. There are now upwards of 200 years of complex entomological monographs and identification guides. Although on-line help is becoming available, much of what we know about insects is still hidden away in books and journals and finding the right identification key for the right insect can be a daunting task. Before launching into book-buying, perhaps the easiest path is to see whether particular groups of insects appeal to the individual more than others. At least by specializing in limited insect orders you can narrow your field of search for identification answers.

There is no point in trying to get a comprehensive list of British insect books together. So many of them are highly technical or complex, enough to baffle even the relative expert. As someone develops an interest in particular groups, they will come across further references to increasingly obscure and arcane papers published in scientific journals; they may also decide to invest in expensive modern monographs or even more expensive antiquarian books.

So here is a list of books that I think might be useful to the novice British entomologist. It is, I admit, a personal list, and it’s just a taster.

Picture books are a start, but they often fail to indicate just how many ‘similar’ species (virtually identical to the naked eye) are not illustrated. I always recommend Collins guide to the Insects of Britain and Western Europe by Michael Chinery, as a good starter because it has so many excellent pictures. It appears to be out of print at the moment, but copies are usually to be had on ebay or through second-hand bookshops and websites.

I also recommend iSpot for getting photographs of insects named. This is a great site, run by the Open University and regularly browsed by experts ready to name whatever is posted up. This would also be the place to post a picture of a pinned or carded specimen too.

Beyond the first ‘easy’ species, the best way to get an insect specimen named is to seek help and advice from an expert. And although they may not be open to naming box-loads of specimens sent unsolicited, many entomologists running recording schemes, or studying particular groups of insects, are often more than pleased to receive material, especially from a new source. Just make contact first to see what help might be on offer.

Local museums often have reference collections of insects, donated by local entomologists, and sometimes the museums are also connected with regional recording schemes. They are often more than happy to allow interested visitors behind-the-scenes access to these collections, either to allow visiting experts to re-identify specimens and confirm names, or to allow others to bring in their own specimens for checking. The Natural History Museum has the Angela Marmot Centre for UK Biodiversity, set up specifically to encourage people to make their own identifications using the facilities available. Here is my take on the centre, and here is a link to their own website.

Here, to start, is a series of links to societies, recording schemes and the like. They have links to other sources of help and information too.

Amateur Entomologists’ Society Society for the beginner. Publishes a good series of introductory handbooks to various insect orders. An annual exhibition is held each autumn with large numbers of exhibitor stands selling books and equipment, new and secondhand.

Biological Records Centre, Recording Schemes List Contact details of each of the very many recording schemes; scroll down to find the insect ones.

Royal Entomological Society For the expert or professional, but a large society which publishes important identification guides (some rather technical). The ‘Useful Links’ section of their website is very extensive and useful.

Other sources of help are: local natural history societies, local museums (which often have insect collections behind the scenes even if not on show in the exhibit galleries), or perhaps even a friendly local entomologist.

12 responses to “How to be a curious entomologist”