I have a firm memory of my first stag beetle. I must have been about 5. We were on a family holiday to Littlehampton and one day were walking around Swanbourne Lake in nearby Arundel Park. A man had waded into a swathe of long grass to recover a football, but was crying out in panic (he may actually have been waving his arms about in the air) — a large male stag beetle was clinging to his jeans, just below the hips. My father strode in, gently picked up the beetle and held it out in the palm of his hand for all to see.

It’s been a particularly good year for stag beetles so far. In East Dulwich, in 2012, we have been positively awash with them. 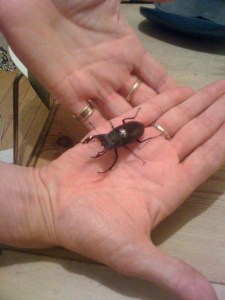 Since the first on 30 May, we’ve had a continuous procession of them. The females started to appear on June 10. They seem more reluctant to fly than the males, and are more likely to be found scuttling across the patio. Females are reported to be more often found squashed than males. Someone suggested that although the males, with their distinctive antlers, are recognizable to a non-specialist general public as stag beetles, the small-jawed females are perhaps mistaken for cockroaches and deliberately targeted by crushing feet. There may be something in this, but it may also be because females walk to their egg-laying sites, whilst males fly to their prospective mates. 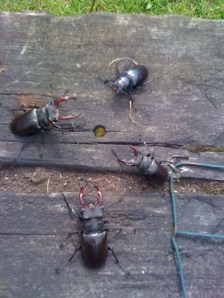 OK, I posed them on the wooden sleeper edge of the pond, but they were all together in the grass when I found them.

There were four together on the grass near the pond on 19 June. Three males had homed in on a female. What’s the collective noun for stag beetles? A joust? A prong? A pincer movement?

And still they keep shuffling past. This one was at the end of the garden earlier this evening, crawling by the shed. It was covered in mites, mostly on its legs. I’ve an idea that female stag beetles are far longer-lived than the males. I’m guessing that, if this is the case, it is maybe because the females remain mostly hidden, in the leaf litter, laying eggs and staying out of the way; the males on the other hand are more active, and constantly on the look out for mates, so are more likely to suffer injury or death.

3 responses to “And still, the stag beetles keep coming”