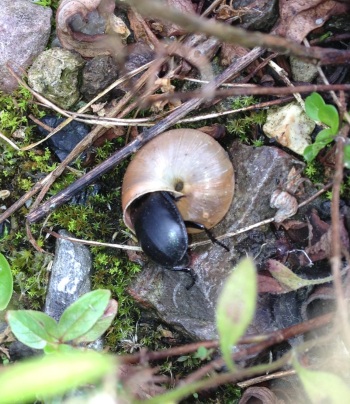 I’m not sure whether it’s hiding, or maybe it’s eating the remains of the snail, but this distinctive little beetle did not notice me until I unceremoniously pulled it from its shell.

Silpha (Ablataria) laevigata is one of the carrion beetles, but I generally find it under logs and stones rather than corpses. Its smooth, slightly shining, wing cases distinguish it from others in the genus which have a wrinkled or corrugated appearance.

This is an easy group to get into. There’s an excellent introductory article, with identification key and plenty of pictures here (scroll down to page 5): http://www.amentsoc.org/publications/beetle-news/2009/beetle-news-october-2009.pdf