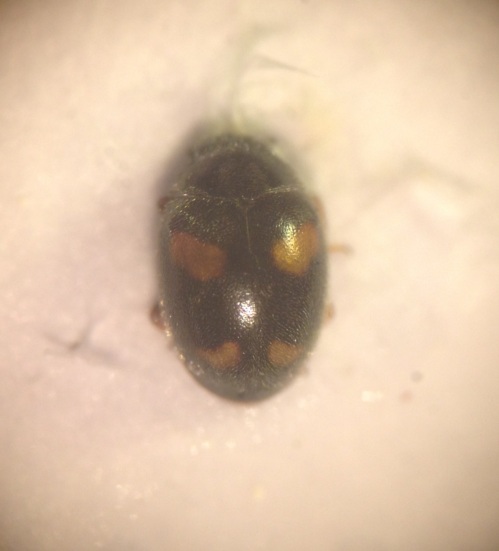 It’s always interesting to find a new ladybird in the garden, and today’s is Nephus quadrimaculatus. At just over a millimetre and a half long it’s not really a ladybird in the popular sense, but it’s a perfectly valid member of the ladybird family Coccinellidae.

Once regarded as one of our rarest beetles, it was formerly called Nephus pulchellus (beautiful) because of its pretty markings. When Canon W. W. Fowler wrote his beetle monograph in 1889 he knew of only one genuine specimen, from Kent.

Things have changed a bit since. There have been a recent spate of records from Surrey and Kent, and a few other localities in southern England. It seems to like ivy, and maybe feeds on scale insects and mealybugs.

But it’s still decidedly uncommon. OK, it’s not a brilliant photo, taken down the barrel of a microscope, on my phone, but it’s still a nice thing to drop out of the ivy on my garden fence.