I’ve been rearranging my weevils. I like the weevils, despite some relatively tricky groups (for example Apion, Ceutorhynchus, Sitona, Phyllobius and Bagous), many have friendly patterns of brightly coloured scales and distinctive bold, domed, shapes. But my reference collection has become cramped to the point of near uselessness over the last 25 years.

Partly spurred on by the now complete set of weevil identification handbooks by Mike Morris, and partly by a glut of storeboxes, I’ve been spreading them out, allowing me to combine many boxes of ‘various’ specimens, and bringing them into one uniform, useful, series.

And I found this. 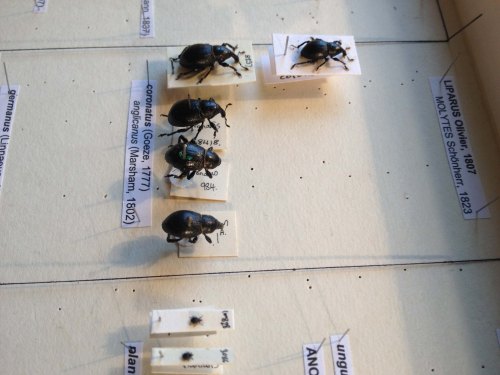 When I first started collecting insects, I numbered them in sequence, and wrote details in a catalogue. At some point in the early 1970s I acquired a proper insect cabinet. It cost me a tenner, and was a fairly rough, home-made affair, but it had drop in framed-glass lids — better than the four small cork-lined stationery (?) drawers I was using up until then.

At this point I threw out all the specimens being destroyed by museum beetles, Anthrenus. These were probably mostly butterflies, moths and hoverflies. I then renumbered the survivors. For some reason I numbered a queen buff-tailed bumblebee from 1968 as specimen 1, but my catalogue clearly shows the first entry was specimen 1A, Liparus coronatus, found in Friston Forest, on 11 June 1967.

With hindsight I think this was a good place to start.

One response to “Specimen number 1”