It’s the size of a full-stop, must be interesting

I rather blithely tell that I usually ignore large showy insects like butterflies, moths, grasshoppers and dragonflies. They’re all very pretty, yes, but on the whole they’re mainly common and widespread species — I feign indifference to them.

But when a tiny speck of nothingness the size of a full-stop lands on my magazine in the garden and skitters down the page like a deranged apostrophe, I simply must scoop it up and see what it is. 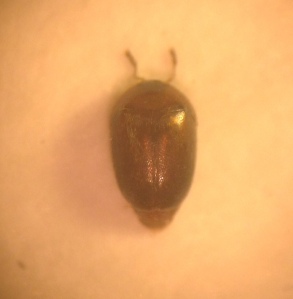 Here it is. Not a brilliant picture I know, but the best I can do at the moment, photographed on my phone down the barrel of the small cheap microscope I keep in the kitchen. And it’s only just over three-quarters of a millimetre long.

Sericoderus lateralis is ‘local’, according to various books; I’ve only found it a few times, but I suspect its supposed scarcity partly reflects the general scarcity of nutcase entomologists willing to look at something this tiny. Maybe there are fewer mouldy haystacks about now, this being the usual habitat mentioned in various Victorian monographs.

It’s a female, by the way — 10 antennal segments. Males of Sericoderus have 11 segments. But then, they’re all females in this species, it’s parthenogenetic; males are unknown, so the females lay unfertilized virgin-birth eggs that give rise to wholly female populations. Weird.

This entry was posted in General Stuff and tagged microscope in the kitchen, Sericoderus lateralis, tiny beetles. Bookmark the permalink.

3 responses to “It’s the size of a full-stop, must be interesting”