It’s funny the questions you get asked when you tell someone you’re an entomologist. I’m not sure if he was scared himself, but I was recently asked by someone in the biodiversity industry (so not a sheltered urban newbie) whether I empathized with people who are frightened of insects.

At first this took me aback, but after a few moments of contemplation, I had to decide that although I might sympathize with them a bit, no, I couldn’t  empathize with them. Not really. I hope this doesn’t make me sound heartless.

I think I know the supposed reasons why some people are unnerved by insects — all the usual things about insects being strange, different, scuttling, ugly, and that fear of something is created by ignorance — in the sense of lack of understanding. And I feel very sorry for people who truly suffer from entomophobia (or arachnophobia), but I’m led to believe that these genuine phobias (i.e. irrational mesmerizing paralysing fears) are quite rare conditions.

The following diagram is taken from a very interesting article on the fear of insects — Hardy, T.N. 1988. Entomophobia: the case for Miss Muffet. Bulletin of the Entomological Society of America 34: 64-69. 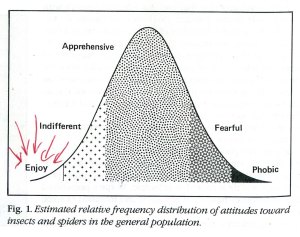 I’ve helpfully annotated this diagram, just so people know where I stand.

In it Dr Hardy contemplates how and why fear of insects might come about in an individual, but he concentrates on the medically extreme end of the fear spectrum. My attention, and certainly my experience, is really directed to the group in the middle ground, the apprehensives.

I think what lies at the bottom of my lack of empathy is really my disdain of the girly squeal. I hope I’m going to be able to sidestep any accusations of sexism here, especially levelled by people already disappointed at my lack of empathy. I have two daughters, and they do not squeal. One of them really does not like wasps, and she will get up and move well away from the picnic table if they come near. But she does not squeal.

I’m thinking that the girly squeal is really a stereotypical caricature anyway, whether emitted by female or male personage, and might justifiably be renamed a childish squeal. Hardy suggests that fear of insects (and other animals) spontaneously appears in early childhood, but then diminishes with age. He quotes ages of 2 to 4 years when the fears start, then a developmental window of 5–7 years during which the fears ease or become exacerbated.

Hardy is quite measured in his tone, and reports evidence for why an innate biological fear might exist (potential harm to pretechnological humans helping them avoid dangerous animals) , and compares it to theories on learned fear, bolstered by conditioning from parents and peers. Nature versus nurture. My money’s on the latter. I particularly latched on to the idea that fears can be transmitted through families, especially from mother to daughter.

Nevertheless, it seems that, by the time the child is 12, a fear (or rarely a phobia) will either develop fully or it will fade, along with other childish fears.

So perhaps it’s just that I don’t like childish behaviour around things I think are serious? Maybe I should lighten up.

It is quite clear, though, that there is a window of opportunity to engage children, before silly fears become silly squeals. Primary schools are where entomologists should be concentrating their public relations efforts. Obviously.