It was the obvious wordplay, so I went with it. They were always called insect days in our house. Inset? what on Earth does that mean anyway? At least ‘teacher training day’ makes some sort of sense. 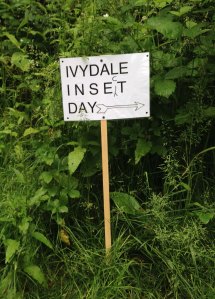 This way; past stinging nettles, trailing brambles, and mud.

I didn’t call it a bug-hunt though (too demeaning for adults) so we indulged in the citizen science that is the bioblitz. But it was a bug hunt really. The hunters were armed with empty humous pots and sent off to see what could be scooped from the herbage of One Tree Hill off Brenchley Gardens.

I’d set up a trestle table and microscope in the small grassy clearing half way up the hill and along everyone came.

Not surprisingly the list of just over 60 species was really quite modest. The site we investigated was very restricted, barely a few hundred square metres of secondary woodland edge and irregularly mown grass and bramble thicket.

Nevertheless everyone seemed very enthusiastic. (Well, I did get a couple of sit-outs “Oooh, I don’t do insects”, slightly disappointing.) There were five species of bumble, including the tree bumblebee, Bombus hypnorum, and one of the cuckoo bumblebees, Bombus vestalis.

The only reason to stop was to have a tea and coffee break.

Everyone was taking pictures on their phones.

The most unusual find of the day was a single small (5.5 mm) metallic green jewel beetle. Agrilus laticornis is notionally ‘nationally scarce’, a denizen of oak woodland (there were some oaks growing here) where its larvae burrow through the bark of dead trunks and branches. It’s always a nice thing to find.

Agrilus laticornis, confirmed by examination of the shape of the prosternal plate behind the front coxae. Technical terms obligatory here folks.

One thing, though, became immediately clear — although older, wiser and potentially better informed, the adults could not compete with the keen and crisp eye-sight of their 5- to 12-year-old pupils. Also, being shorter, the children are naturally closer to the ground, always a useful thing when bug-hunting.