Snatched from the jaws of death 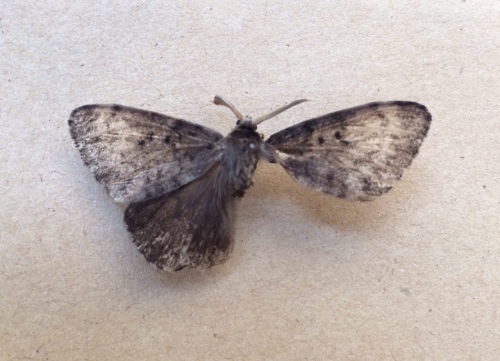 That’s not always the optimistic line it’s made out to be. Sadly, for this moth, they were the jaws of a dragonfly, and the moth was already dead.

The emperor dragonfly, Anax imperator, is a large and dramatic insect on any occasion, but when one rattled past my face with a huge moth in its mouth it was particularly startling. I tried to creep up on it for a photo, when it came to rest on a bramble leaf, but I was squelching near ankle deep in muddy water and pushing my way through waist high rushes so my approach was not gentle and I disturbed the poor beast. It dropped the moth, but got its meal, since most of the highly nutritious moth body was missing.

Even from the damaged and worn remains I can tell this is a male gypsy moth, Lymantria dispar. Hmmm. Despite the name being used positively for an acrobatic biplane and Sir Francis Chichester’s round-the-world yacht, the gypsy moth of the insect world is a notifiable forestry pest, so how do I break the news to the ecological wardens of London’s Olympic Park that they might have an infestation on their hands?

Unfortunately a lone male doesn’t tell us much. They migrate far and even before genuine breeding colonies were discovered in the London area they turned up irregularly in southern England.

There are infestations of gypsy moth in several parts of London, so another in the Olympic Park would be no surprise. The gardening staff will have to keep an eye out for the gregarious caterpillar masses.

In the mean time let’s hope that the park’s healthy population of large dragonflies can continue their biocontrol efforts.

One response to “Snatched from the jaws of death”