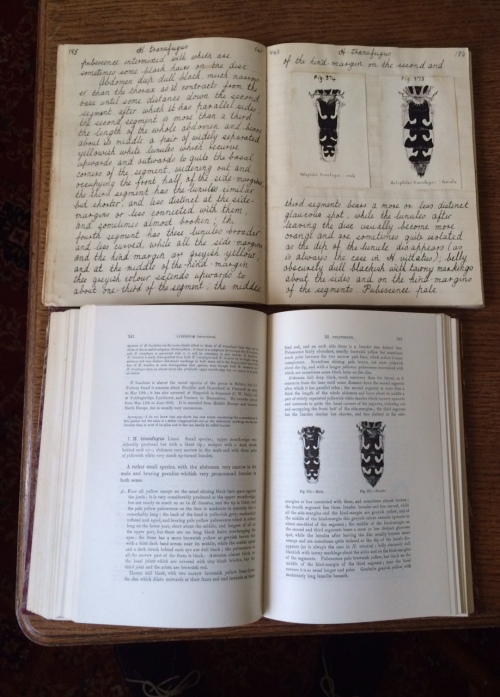 Some time during the late 1940s and early 50s my father’s burgeoning interest in natural history embraced flies. However, hampered by lack of a microscope and books, his options were limited. He wrote to eminent dipterist Leonard Parmenter and was pleased to be invited to his house. Parmenter was helpful and encouraging and although Dad was mainly a botanist, a few of his published articles were on hoverflies.
Just as today, the Syrphidae offered a good introduction to flies, many of which other groups offer taxonomic difficulties that still give experts nightmares. They are generally large, bright, attractive and distinctive species, and there was a good ID guide available.
At that time the masterful monograph on the hoverflies, by the great George Verrall, was the most important book on the group, but it was huge, at over 800 pages, and was an expensive purchase beyond my father’s meagre means.
Instead, over a period of several months, he borrowed a copy of the book from Paddington (I think) public library and laboriously copied out various parts of it longhand into three large ruled hardback exercise books, pictures and all. This he used to identify and research the flies.
Years later he was able to get hold of the 1969 facsimile reprint of Verrall’s book, still quite an expensive book even then, but he kept his manuscript copy, now a poignant memento of an earlier time.

2 responses to “The working copy”