Following on from the earlier how to be a curious entomologist workshops covering basic entomological techniques, London Wildlife Trust asked me, in June, to take some of their trainees through a brief introduction to finding insects, making a collection and using identification guides.

There was a time when collecting insects was a common hobby amongst anyone who lived in the countryside. But since far fewer people now live outside cities, and with a certain uneasiness about killing wildlife, what I once took to be an easy introduction to studying nature is now an alien, potentially suspicious, activity carried out by oddball eccentrics. In one of my previous blogs I’ve argued why collecting insects is still vitally important, here’s the link.  These workshops, run erratically and piecemeal as sponsor organizations approach me,  are all part my effort, as a fully paid-up eccentric, to start normalizing entomology again.

First set up your laboratory.

Over the years I’ve accumulated half a dozen simple stereomicroscopes. Starting at about x10 magnification, these were perfect for learning how to set beetles, gluing them onto offcuts of white card. Some came with their own in-built lights, for the others I had a selection of cheap desktop lights. All set. 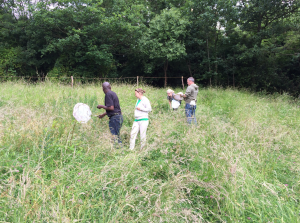 Next head out into Devonshire Road Nature Reserve in Lewisham. The combination of small classroom space and wildlife site was perfect.

I’ve also accumulated a selection of nets and beating trays. It was glorious weather, so finding the insects was easy. Entomologists are so thin on the ground, that I still marvel when I see anyone else using a net. Here were six others. A gaggle? 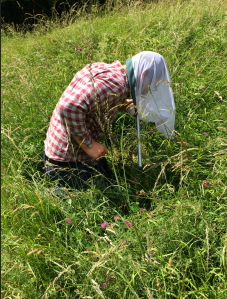 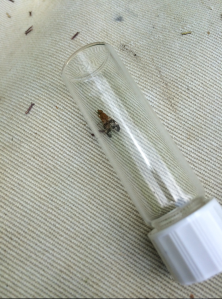 This is listed as an endangered species, red data book category 1, and I first found it only about 250 metres away at the Honor Oak Covered Reservoir about 15 years ago. It lays its eggs in the flower heads of knapweed, a common enough plant, but obviously needs something more. It may be turning up more regularly now, but is still scarce. Two specimens found close together in a thick bundle of knapweed showed that there was a breeding colony here.

Back in the makeshift laboratory there was carding, pinning and setting. 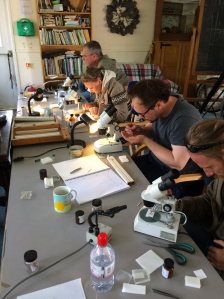 It all looks very professional.

With only a few mishaps. 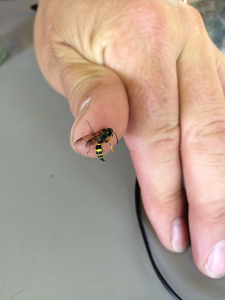 We did find a live female stag beetle in the log pile, but these bits of a male found nearby were added to the collection.

This must have been a very diminutive male when it was alive.

All in all, a successful event.