Behind the scenes at the museum

On Tuesday 4 September I took 7-year-old up to the Natural History Museum, the last day of the summer holiday before going back to school on the Wednesday. It was the perfect time. Most kids had already gone back to school by then, but school trips to the museum had not started yet. There was us, and a few tourists, the quietest I have even seen it. Bliss.

While we were there I took the opportunity to go and have a look at the Angela Marmont Centre for UK Biodiversity.

The Angela Marmont Centre, part of the new Darwin wing of the Natural History Museum.

I’d heard about the place, but never been in. As a teenager, and after university when I first moved to London, I often heard about entomologists ‘going to the BM’. In those days it was still the British Museum (Natural History) or BM(NH). At the time I did not know anyone working behind the scenes, and always felt a bit too daunted to go and have a look at the national collections to try and identify some tricky specimen or other.

The Angela Marmont Centre is set up for people just like me. In the introductory video, here, it is specifically touted as a ‘way in’ to the perhaps fusty and dusty academic expertise behind the scenes. But, more than this, it tries to offer visitors a chance for them to make their own discoveries, and identify their own finds.

There are extensive representative collections of UK insects (and other organisms no doubt), and there is a good starting-point library of identification guides. So, rather than just hand over a specimen and have an expert name it there and then, a visitor is much more likely to be guided to the relevant drawers of potential genera, and allowed to browse through the collections,  confirming an identification by using the ID guides and monographs. It is the obvious place for the novice entomologist to take along a boxful of troublesome specimens to work through.

You are supposed to make an appointment, but we just rolled up and rang on the doorbell. Luckily Chris Raper and Stuart Hine were on hand to give us a brief guided tour. 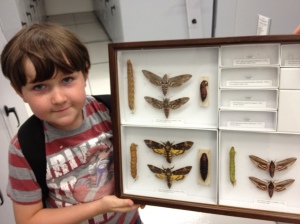 Death’s-head hawk-moths. Anything with a skull on it is cool for a 7-year-old.

There are plenty of practical identification guides and manuals, actually the library of the London Natural History Society.

The stuffed fox is for decoration rather than identification. 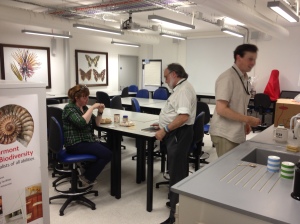 There is plenty of laboratory bench space, enough to house visiting groups from natural history societies when not being used for coffee breaks.

The centre is open  10.00-17.30 weekdays and the first Saturday and Sunday of the month. More information, and contact details for making appointments, are on their website here.