See what I did there?

Not only is it the time of year for flying ant days, the last week in July was also my final submission of the typescript for Ants, in the Bloomsbury British Wildlife Collection that I have spent the last two years writing, on and off. The final rejig was a reshuffling of the chapters and renumbering of the illustrations.

I started in July 2018, and half way into the first chapter, I was already writing about those familiar flying ant days. “These mass aerial releases of new males and queens, usually of the ubiquitous black pavement ant, Lasius niger, fill the air with countless millions of flying insects. The flying ant morsels are manna to the swifts, swallows and martins that scream after them, but a potential breathing or blinking hazard for cyclists, and a real visibility nuisance to motorists running low on screen-wash.” And how’s this for a strange coincidence? On the day that I wrote that paragraph, 4 July 2018, it was also flying ant day in Nunhead, where I was writing, and East Dulwich, to which I cycled home in the afternoon. I didn’t swallow any ants on my way, but plenty bashed into my face and got tangled in my eyebrows. It’s a gentle traffic-free cycle ride through Peckham Rye Park, so there wasn’t too much chance of me being dangerously distracted in front of a speeding juggernaut.

However, later that same day the number 2 women’s tennis seed Caroline Wozniacki lost to relative outsider Ekaterina Makarova; magnanimously Wozniacki did not blame the flying ants for her surprise defeat, but earlier she had asked the umpire if anything could be done about the ‘bugs’, and the media coverage was full of images of her swatting at the hordes of winged ants sweeping across Court Number 1 at Wimbledon. There was another media circus event in July 2019 when clouds of flying ants confused the meteorological office by appearing on the increasing sensitive radar as ‘rain clouds’ over Brighton, Bournemouth and Winchester. It was repeated again last month too.

It’s not just that there are more flying ants, it’s also that the radar is becoming more sensitive. In 2020 we had our first flying ant day in East Dulwich in mid-July, but I came across another in Catford on 29 July. Yes, it’s a myth that there is one all-over national flying ant day in the year. There is some local synchronization, but different regions have their own days, and on every warm day between July and September there is a flying ant event going on somewhere in Britain. 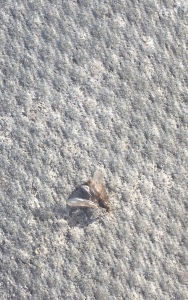 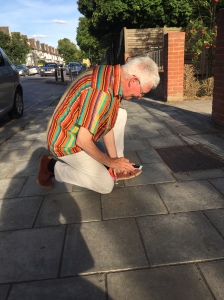 People tend to cross over to avoid you if you start taking photos of the pavement.

That’s Lillian’s shadow, she thought my interest in the pavement looked funny. She was right, but if you look really close you can just make out the queen that I’m interested in.

The book is scheduled for publication in spring 2021 — just in time to pre-empt flying ant media madness next year perhaps.

I’m writing a book about ants. It’s still many months from completion. A chapter on ant evolution must mention fossils, so I thought I’d throw this suggestion into the internet maelstrom to see how it should be honed. Or binned.

MIRACLES IN STONE — WHY ARE FOSSILS SO RARE?

Recognizable ants have been around for at least 100 million years. We have exquisitely preserved fossils in amber to prove it. A quick internet search shows that ants preserved in amber are widely available from dealers. I was tempted by several in the £15–£30 price bracket. The ants were all tiny, 2–4 mm, but with low monetary value they were unlikely to be fakes. However I was not temped by the mating ‘queen and drone’ for sale from a US website at $49,500. If memory serves, this is the same item that I came across over 10 years earlier when I was researching ‘the most expensive insect’ (Jones, 2010, Extreme insects, HarperCollins), and which was then on offer for $100,000. No matter how rare such an event might be to get fossilized, this seems to be a fairly arbitrary sum, even if now knocked down by 50%.

But it at least got me thinking.

Dinosaurs have captured the popular imagination, but this las led to some completely silly and imaginary ideas about fossils. Fossils are real, but they are so rare that they do, actually, verge on the mythical. I casually wondered out loud what might be the chances of something getting fossilized. This seemed like quite a straightforward question to me, but I soon found out that nobody was willing to offer up any calculations. Taphonomists (fossil palaeontologists) openly mocked my question, claiming that ‘putting odds on it is impossible’. Having thought about it a bit more I’m tempted to agree with them. Nevertheless, having set the metaphorical ball of fiery curiosity rolling through my brain, I here offer some back-of-the-envelope calculations.

Firstly — how many ants have ever been available for fossilization? We have to start with a calculation from over half a century ago, by C.B. Williams (1960, The range and pattern of insect abundance, The American Naturalist, 94: 137-151). Extrapolating from bird counts, insect trapping surveys, log–normal biodiversity indices and world-wide species lists, he estimated 1018 insects on the planet at any given time, of which say 1% were ants; this would give us 1016. Assuming some sort of conformity with modern faunas, and allowing each ant to live 1 year, the last 100 million (108) years would therefore have produced 1016 x 108 = 1024 ant individuals having crawled on planet Earth.

Secondly — how many fossils are known? It turns out that about 750 fossil ant species are described from, say, 10,000 ant fossils. At the final count this does not seem like very much at all.

Finally — what proportion of fossils have we humans found? Of course humans have only discovered a tiny fraction of the fossils buried in the soil. This is where the calculations and guesswork start to get a bit fanciful. For the sake of argument, I’d suggest that humans have only discovered 0.001% of ant fossils;  this is a figure I admit to having arbitrarily plucked out of the air. I dare somebody to disagree with me.

Given that the chance of winning the UK’s National Lottery is reportedly 4.5 x 107 : 1 (45 million to one), the chances of an ant becoming fossilized are about on a par with the same person winning the lottery two weeks running. Given that 32 million people are reputed to do the lottery each week, my increasingly tenuous grip on mathematics suggests that it might take 613, 278 years for them all to have just a single win. For someone to win twice in a row seems mathematically (and morally) untenable. For an ant to become fossilized must be equally dubious.

It’s that unknown how-many-more-fossils-are-left-in-the-ground part of the equation that gives me most anxiety. But even if my guesstimate is out by a million-fold (even a billion-fold) the odds are still vanishingly small. Really, in any sensible world, fossils shouldn’t exist — each and every one of them is a tiny miracle of geological chance. Perhaps I was being a bit dismissive of that mating ant pair in amber.