Anatomically correct — a challenge is issued

Perhaps there is nothing more smart-arse than the spiteful sci-fi critic piping up from the back of the room “Well, that’s scientifically impossible”. We’ve all done it. But some of us keep doing it, and it’s usually a derisory sneer at an insect drawing along the lines of “Well, that’s not anatomically correct”.

An uncertain number of legs, a hazy knowledge of wing or body morphology and a cavalier disregard for antennal structure are the usual fails. It’s just not good enough.

So here is my challenge. If I can do a passably identifiable image using pancake mix, then I expect anyone else to do at least as good.

Anything less is unacceptable.

Preying mantis — OK this one looks a bit like a pugilistic kangaroo mantis.

Wind scorpion or solifuge — head and thorax shape the most important characters.

Wing map of Tephritis cometa — that really is a comet-shaped star mark. 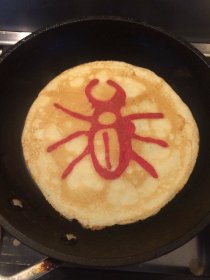 Stag beetle — this is an easy one. 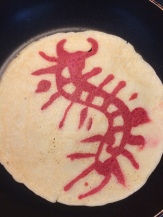 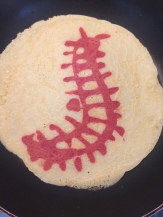 Crab — this is as close to verging-on-the-cartoon that I will accept.

Harvestman — the right number of legs, and a distinct dorsal abdominal mark.

False scorpion — OK, the legs could be a bit longer, but I’m prepared to give some latitude.

Rose chafer — pay attention to pronotal shape and make sure the scutellum is visible.

Rhododendron leafhopper, Graphocephala fennahi, I really need green for this one, but you get the idea.

Inspiration from the feline at my feet in the form of one of his fleas.

Graphosoma italicum is a shieldbug to look out for on brownfield sites, just a vagrant so far in the British Isles

Fluffy is difficult, but at least the proportions of the bee-fly, Bombylius major, are right, and the proboscis.

The wings of the thistle stem gall fly, Urophora cardui were a bit of a challenge, and I was running out of batter, so here’s the gall instead.