You’re just going to have to take my word for it that this was the most interesting insect I looked at down the microscope today. 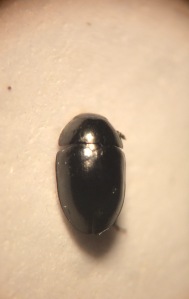 Two millimetres long, black, moderately shining, averagely punctured, appallingly carded at an inconvenient skew, it was not immediately obvious what it was. And that was the point. That was why it was interesting.

It’s not very often I look at an insect and can’t even work out what family it’s in. This one just did not look right. My normal method of identification is to think something along the lines of “That’s a ground beetle, maybe an Acupalpus or similar”, “Ah, a robberfly, one of the shiny black ones”, or perhaps “That’s a very small Dolichopodid”. I know where to start — what family, often what genus, and very often which species group, and off I go to find a key or a picture to settle the matter.

But here I was, dithering. I just could not summon up a mental image of which group of beetles this one fitted in with. I started flicking through picture books, but the trouble with small black slightly shining beetles, is that they all  look just like every other small black slightly shining beetle. I peered at the antennae, counted the tarsal segments, eyed up the bristles on the underside of the abdomen, admired the flattened legs. Nothing.

Back to basics then, and a wade through the laborious dichotomous keys to identify which beetle family, until I eventually get to Phalacridae, pollen, flower or smut (fungus) beetles according to which book you use. But I’d already dismissed this distinctive group because it didn’t look like one. Except, now I look again, and trying to overcome my preconceived suspicions read through the descriptions given in volume 3 of the Rev. Canon W.W. Fowler’s excellent Coleoptera of the British Islands (1889) where the key immediately splits off Phalacrus caricis — the only British phalacrid that doesn’t look like a phalacrid because it is not convex and shiny enough.

And that’s what it is. It’s not rare, it’s not pretty, it’s not striking. It’s nothing out of the ordinary, except that it’s slightly flatter and slightly more granular than the others in the family. But I had never seen it before, and it presented a puzzle to me, which I eventually solved.

This, then, is my utter delight in nature. Not finding great big flashy brashy bits of animated insect bling; not rediscovering some rarity last seen a century ago; not seeing the spectacle of mass migration, or observing a deadly pursuit, or a bizarre mating ritual. It is in the simple intellectual puzzle of finding something slightly different, slightly unusual, and working out what it is, and how it fits in with the world.