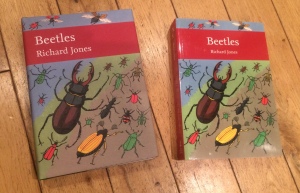 Hardback and paperback; a minor rejig of the ladybird group, but otherwise a matching pair.

It’s here. Publication day is set for 25 January 2018. It’s been nearly four years since Mark Telfer sidled up to me at the 11th British Entomological Society Coleopterists’ Day at the Oxford University Museum of Natural History, and enquired under his breath whether I’d heard from Sarah Corbet yet, about the idea for a beetle volume in the New Naturalists series. I nearly dropped my cup of tea. It seemed that feelers had been put out for a victim to be approached, Mark, it transpired, had landed me in it.

The thought of such a commission was daunting, to say the least, but I knew that if the offer came I’d hesitate for all of 2.5 seconds and then accept. When it came, I did.

Producing the book has been even more daunting than I imagined at the time, and although it has been long and exhausting in the researching and writing, it has also been intellectually and emotionally rewarding beyond measure. My eternal thanks go to Mark, and I look forward to returning the favour with some equally monstrous task for him in the near future.