How to startle a chemist?

When I found Rhopalapion longirostre, a tiny weevil that feeds on garden hollyhocks, new to Britain in June 2006, I immediately set about composing a short article for The Coleopterist announcing its discovery. These short notes, published in the various entomological journals were, until the advent of the anonymous database, the basic stuff of biological recording, and the first act of anyone researching a particular species, or habitat, or locality, was to trawl the literature for records.

They are also, to some extent, the currency of the field entomologist’s kudos — “look what I’ve found”. So I was a bit put out when the editors cut what I thought was a key part of the information. I found the weevils as I was wandering around the gardens of the local church — that much made it into print. But why was I there? Not out of any religious conviction, but to take my young daughters to their ballet lesson in the church hall next door. While we waited, I carried my 1-year-old son around as we explored the sunny grass and watched ants busy on the patio. It was here, on the hollyhocks beside the church steps, that I found and immediately recognized the weevils, small, but thoroughly distinctive because of their unfeasibly long snouts. In order to collect a few specimens I needed a container so, I simply tipped out a couple of broken bread sticks and a few left-over raisins from the pocket Tupperware box that had contained 1-year-old’s afternoon snack. These details, obviously, were considered unnecessary twaddle, and the editorial red pen had excised them. A shame, I thought.

I like to flick through old volumes of The Entomologist’s Monthly Magazine (EMM), or Transactions of the Entomological Society, or The Entomologist’s Record and Journal of Variation. It is just this sort of ephemeral incidental detail that makes some of the old articles so entertaining 100 and more years after they were first published. They are all full of fascinating notes and records by what we now regard as the fathers of British entomology (hardly any women in those days, I’m afraid), but they also contain so many entertaining social commentaries and personal asides.

I recently came across this one, from the EMM, 1869, volume 6, pages 162-163, and I’ve taken the liberty of making a screen grab from the on-line version put up by the Biodiversity Heritage Library. It makes charming reading. 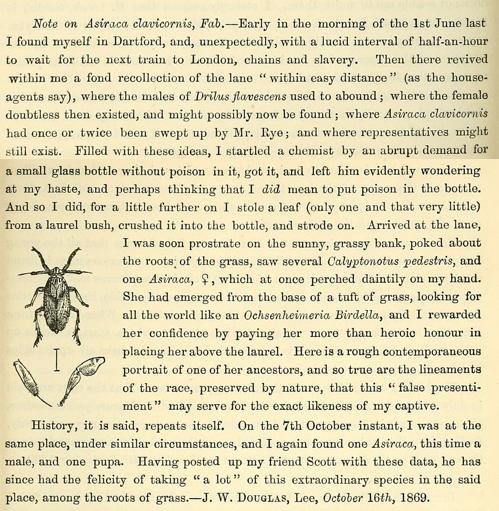 I wonder if there is still a chemist to be startled near Dartford station?

John William Douglas (1814–1905) was one of the foremost entomologists of his day, a president of the Entomological Society of London (later to become the ‘Royal’ in 1933) and one-time editor of the journal into which he put this snippet. He was an erudite and learned scientist, but even so he was not above inserting some ‘trivial’ personal details into his short note on this scarce little hopper. The result — a readable and informative record of an insect still restricted to a few rough grassy places within easy distance, as the house-agents say, of the built environment in the environs of London, chains and slavery.

It makes a change from some of the dreary pieces that get published in scientific journals today. I shall aspire to emulate Mr Douglas, and try to get in something about startling a chemist next time I find a beetle new to Britain.