We’re all going on a quetzal hunt

There was a time when holidays could be intrepid, adventurous — dangerous even — and not tied down to the stranglehold of school holidays. So October 1992 saw us in Guatemala, with expectations of Mayan temples and lush rainforests alive with howler monkeys, agoutis, toucans and iguanas.

After three days of oppressive dusty heat in Guatemala City, vainly awaiting our lost luggage to return from Mexico, or California, or wherever it had gone, it was a relief to be on our way to the stylish cool of Posada Montana del Quetzal, the Inn on Quetzal Mountain.

The Inn, a weekend destination of the City’s executives and civil servants, offers quiet civilized chalets and fine views over the valley. The quetzal, a resplendent metallic green and red bird, almost painfully beautiful and mythically rare, is the national emblem of Guatemala, and also the name of its unit of currency.

The four-kilometre hike from our chalet to the quetzel biotope reserve would be our first taste of the rugged terrain for which the country is well known. The mountain highway was narrow, but tarmacked, and it was almost deserted of traffic. It would be a pleasant stroll.

As the steep road wound up the heavily wooded hillside, it passed terraced subsistence farmlands and we caught sight of the occasional plume of smoke from bonfires in the ragged fields. We were expectant — any minute we might catch a glimpse of the fabled bird through the ferns and epiphytes. Occasionally a rattling pick-up truck belching diesel fumes would pass us, usually heavily laden with passengers, at least one of which would be holding a large rifle. When each had gone, the quetzal-free silence on the hills seemed even deeper than before.

As we got closer to the reserve, the cloud came down thick and damp. And the traffic started to pick up. In quick succession, several small minivans went past. Each was topped with large megaphones blaring out bird-scaring music, and the sides were plastered with ads for the local beverage — Gallo (cockerel) Beer. Were they advertising to the sparsely scattered farmers in the fields? They certainly weren’t doing much for our chances on a quetzal hunt.

Then it started to rain. We were entering cloud forest. It may seem odd now, but I was wearing a jacket and tie at the time — part of my nearly-mad-Englishman-abroad disguise. This was a time of troubles in Guatemala; there were frayed tempers in the ever-present army and disgruntled rebels in the hills. I hoped my outlandish appearance would engender curiosity and amusement rather than hostility if we were found trespassing or looked too suspicious.

At the time I thought I looked rather smart. Only my pith hat was missing.

The next noisy van had a bicycle strapped precariously to the roof and a few minutes later the explanation dawned on us as the peleton of the Vuelta a Guatemala came pedalling out of the heavy drizzle. Keen fans of the Tour de France, we applauded loudly as the cyclists passed. We were, I think, their only audience on the roadside that day. They were hotly pursued by the support convoy, a scattering of honking trucks full of bicycle parts and clattering motorcycles with pillion riders wearing spare tyres like bandoliers. 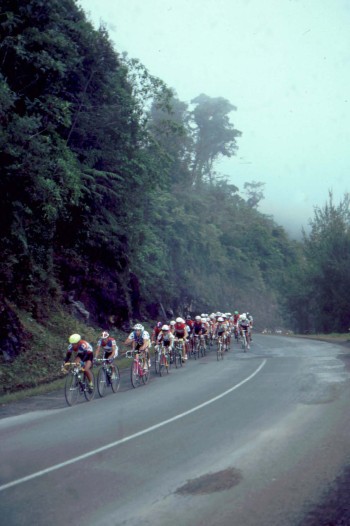 The Vuelta a Guatemala. Still the only international cycling road race I have witnessed first hand.

We were also the only visitors to the quetzal reserve that day. It seemed that we were the only living things in there. Halfway round the narrow gloomy path through the forest we hunched bedraggled over a sandwich and flask of coffee; a large green chafer dropped out of the dripping trees onto my head. It was very pretty and I was pleased to see something so exotic, but it wasn’t a quetzal. It was the only creature we saw in the dank woodland.

Still one of the greenest insects I have ever seen.

Leaving for the sodden hour’s march back down the mountain later, we were suddenly hailed by one of the reserve staff; had we left a dripping anorak in their hut? No, he was gesticulating at a tall thin tree in the car park. Squinting through the mist I could just make out the long curving green tail feathers of a marvellous bird sitting stooped in the rain; it was our quetzal after all. 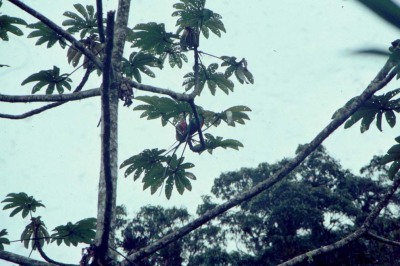 One wet quetzal, sitting in a tree.

Despite the continuing downpour, our walk back to the inn, with its open fire and comfortable bed, was buoyed up with our new enthusiasm for the country and its wildlife. Our luggage did not reappear for three months, but it was an unforgettable adventure — Colombian José Castelblanco went on to win the Vuelta, we got to the Mayan temples of Tikal, met plenty of howlers, agoutis, toucans and iguanas, and we saw that one wet quetzal. Magical.