Another larder invasion, and a lesson in biogeography

Another average day in the life of an itinerant entomologist as I receive the following photo from Viv via Facebook. 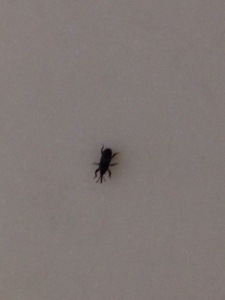 “Richard — do you know what this is? They are ant size and invading my kitchen and I can’t work out where they are coming from or what to do about them.

Shortly after comes the report that they are emerging from a bag of bird seed in a cupboard. My suspicions centre around the grain weevil, Sitophilus granarius, perhaps the world’s most devastating pest of stored food, but not something you come across very often nowadays. Tupperware, clingfilm and fridges have done away with so many previously important household pests, which can now no longer find their way into our food reserves. The grain weevil is not a very 21st century household pest anyway, since we no longer store whole grain wheat, ready for milling into the daily loaf, in our houses any more.

Back in a pre-industrial world, the household or village grain store would have been constantly under attack from grain weevils, laying their eggs, one in each kernel, which would then be hollowed out by the grub until the adult beetle chewed the distinctive circular hole and emerged a few weeks later. The beetles, and the hollowed remains of wheat seeds are a regular find in archaeological digs throughout the Old World. Despite being flightless, completely lacking wings, it was already cosmopolitan, occurring throughout the Middle East, Europe, North Africa and Central Asia, something like 8000 years ago, as agriculture took hold on civilized humanity. Its origins are frustratingly unknown, it has never been found in any truly natural habitat and is only known from human granaries. It does not even occur in wheat fields, or in the Horn of Africa where our cultivated wheat progenitors are thought to be native, and still grow wild.

I don’t usually make house calls, but since Viv lives just up the road I called round at no extra cost. It’s easy to collect a few specimens; one just inside the front door, several in the kitchen and one from the cat’s water bowl. Now for a closer look. 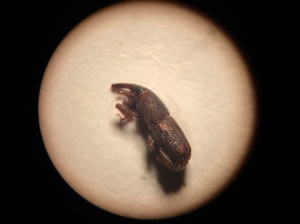 Ah, so not the grain weevil after all. But I was close.

Turns out it isn’t the grain weevil after all, but its congener the rice weevil, Sitophilus oryzae. It has similar life history, but is Far Eastern, breeding in rice grains, rather than wheat. It will also attack other seeds and grains. 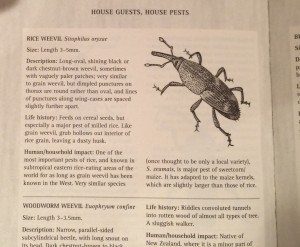 Oh look, I know someone who’s written a book about household animals….

So, Viv, you’d best revisit the pantry and check out the biosecurity of your basmati, arborio, lentils and pearl barley.