The move to the country

Torendo, 11 Station Road, captured by local artist George Sims, showing a deceptively vehicle-free street, as it no doubt was in July 1968.

When my family moved from urban terraced Croydon to a sunny detached house in Newhaven, in Sussex, in 1965, the great vistas of the South Downs, Sussex Weald and English Channel were laid out before us, and we leapt at them with extensive family rambles most Saturdays and Sundays from March to October. Before we owned a car those family trips took the form of picnic hikes over the Downs  — quite literally just out the door and up the hill. Or we’d take short journeys by bus and train to Friston Forest near Eastbourne, Mount Caburn on the outskirts of Lewes, or particularly the famous Victorian naturalists’ destination, the Abbot’s Wood complex at Polegate. But for my 6-year-old mind, just stepping into the garden was an adventure.

Our Croydon house (15 Suffolk Road, South Norwood) was a corner end-of-terrace. It had three floors and four bedrooms, but it only had a tiny courtyard garden. Mum could water the whole thing by angling a short 1-metre stretch of thick hosepipe out of the window, from the kitchen tap, and using her thumb over the end to squirt the tiny rug of lawn and the narrow surrounding flower bed. My tricycle took three pushes on the pedals to get from one corner of the side passage, where the old washing machine was gradually filling with rain water, to the door of the coal shed, or whatever the dim airless former outside toilet was now used to store.

But I thought Torendo was a palace. It had a broad staircase with elegant dark-wood acorn-topped newel posts and a polished curving banister rail, and at the half-landing there was a bloody great stained glass window. I’d only ever seen things like this in a church or a manor house. I was agog. Nobody really knew where it had come from, or why it was there. My Dad had got the notion that it showed three of Apollo’s muses, but he’d never showed a great knowledge of classical literature or art on which to base this. Who knows? The story had also gone that the original builder had scavenged different sized doors and windows to fit the place out, and so the leaded glass had probably come from some sort of scrap yard — architectural salvage it’d be called nowadays.

It was quite a few years before I realized that stained glass windows like this don’t often feature in standard family homes.

The house was one of the oldest buildings on Mount Pleasant, the hill above Denton Corner, and on old Ordnance Survey maps it could be seen, a lone square grey spot, just up the hill from the Ouse flood plane and the sweep of the A259 Eastbourne-to-Brighton coast road, passing below. It occupied a large plot over which its white cube form presided regally. At least it did until we bought it. Just before us, the house and grounds had been bought by a developer, a Mr Fish, who lived further up Station Road. He’d then severed off two plots of land down the hill of Station Road and two plots along Beresford Road, on which four new houses would be built, leaving the Torendo we bought now in a much reduced square of land in the corner. 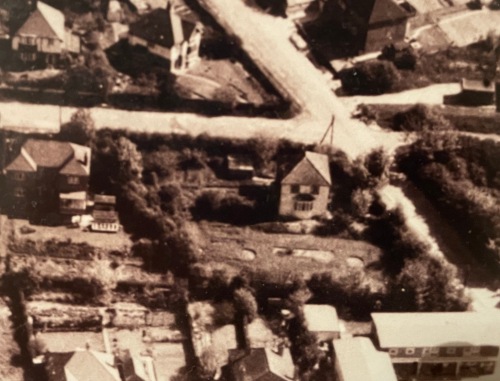 An aerial photo of the house in its original large corner plot. This can only have been taken a year or two before we moved in.

When we moved, the only signs of these future houses were some meagre wire fences and the trenches now filled with concrete foundations. Needless to say I went exploring, fascinated by the offcuts of reinforcing steel, rubble remains of some demolished outbuilding, and the large buddleja bushes abuzz with bees and hoverflies and the occasional red admiral butterfly. Building site security is a bit more stringent nowadays.

Torendo was named, apparently, for a previous owner’s three children, taking the first few letters of their names — Tom, Renie and Donald. In its heyday it had been a bed-and-breakfast guest house. The original painted metal sign, long mouldering in the loft, now hangs in my living room and still proudly announces its credentials. The TORENDO typeface, with its mid-line swash detailing is similar to that used on BONANZA and RAWHIDE, the famous western TV series of the 1950s and 60s, and was presumably meant to give the place an exotic air. When the new houses were built in Torendo’s former garden, number 3 of the 4 of them was called Tol Pereth, perhaps having a West Country sound to it, but it was actually an anagram of ‘plot three’. 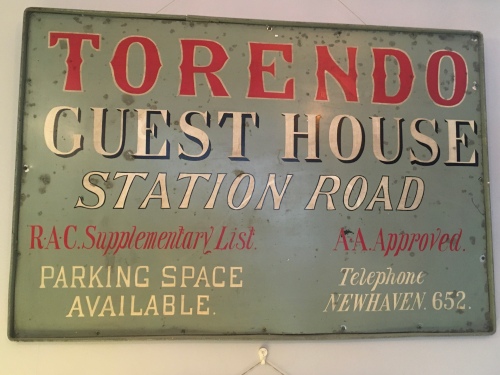 When we first arrived I also remember a series of large wood and hard-board signs in the shed; they were battleship grey, painted with white block letters proclaiming, vertically: ICES, TEAS and OPEN. I guess they were propped up against trees or road signs down on the main road, to entice passing traffic to stop over for light luncheon refreshments.

At first, the garden was like a jungle. The house had been unoccupied for many months and even when we bought it we didn’t move in for some time until Dad’s office finally relocated from London to Lewes; this was the motivation for our move to Newhaven in the first place. A massive privet bush, 3 or 4 metres high, in the middle of the garden, made a fine den for my brother and me to play in and an old apple tree outside the kitchen door afforded good views past the house to the grazing meadows that stretched away off towards the sea. The garden was dominated by red valerian, growing out of the broken concrete paths and thin soil just a few centimetres deep over the solid chalk rock. Of a summer evening it smelled strongly, and attracted hummingbird hawks and other moths, and above the roof any outfliers were picked off by the clouds of bats that thronged around the lamppost on the pavement nearby. I was in awe of these animals’ aerial prowess as they flapped about madly like deranged black handkerchiefs, scattering flurries of disembodied insect wing fragments.

Mr Sims’s rear view of the house, showing the stained-glass window, but also the disreputable shed and some attractive drain pipes.

The garden clearance started piecemeal each weekend as Mum and Dad found the time. The privet thicket was felled and a couple of old china butler sinks were set in as ponds — soon colonized by frogs, dragonflies, damsels and water boatmen. Digging the thin earth became an adventure too, as the ground everywhere was littered with large spent rifle shells and the occasional impressive live bullet. Prior to the D-Day landings just over two decades earlier, the house had been a billet for Canadian infantry and they must have been target-practising regularly. Every so often Dad and I would take the live rounds and hand them over the counter at the police station in Newhaven. Here it was, on the community noticeboard, I first saw the ‘wanted’ posters for Colorado beetle, the potential potato pest insect that had recently become unassailably established in Europe, and about which British farmers were rightly concerned. The cartoon style watercolour showed the shining striped and domed adult beetle, and its blobby plasticine-like larvae busy demolishing a ragged-looking potato crop. It seemed a peculiar juxtaposition to be handing over murderous ammunition under its gaze. Not that I really knew much about police work — my information came from Dixon of Dock Green and the occasional gossip from my police inspector uncle about vandalism on North Kent farms or a bungled robbery in a village post office.

That year we arrived, 1965, had seen one of the hardest winters in living memory. Unoccupied because we were not moving down until Dad’s office relocation was complete, one of the water pipes in the bathroom had frozen and with the thaw it burst and leaked, bringing down the kitchen ceiling. It also damaged the cheap veneer parquet-style flooring that covered the floorboards downstairs. All that had to come up and the ceiling had to be replastered before the house was habitable. My Dad being a hoarder, salvageable bits of the parquet were knocking about in the shed for years afterwards. They were all pretty bashed up, not just with water-staining, but from the dimple puncture marks of countless stiletto heals — the results of wild dance parties organized by those Canadian soldiers, we were informed.

With the repairs done we finally moved in May. I have no memory of the removals lorry, partly because I was not there when they packed up. But I do clearly remember my arrival in our new home. On the day before the move, Dad and I came down by train and we camped in the empty house overnight. The tiny box room, my sister’s bedroom for all the time I lived there, had a built-in wooden cot-type bed, with cupboards and drawers underneath it. This was where Dad slept. I was on the camp bed next to him. Goodness knows how anybody ever went camping in those days. This ostensibly moveable bit of furniture was actually a heavy and unwieldy contraption of thick articulated wooden struts and a sagging slung hammock of stiff hessian cloth and webbing. Maybe you were supposed to have a sherpa or a bearer to carry it about for you? Two perhaps. Anyway, fish and chips from the local shop for dinner and an off-the-cuff bedtime story about Willie Stag Beetle and his family, and I was nearly out. But I’d forgotten my cuddly toys. Never mind, hero Dad to the rescue as he brought them out of his rucksack — the unimaginatively named Dog and my broken-nosed threadbare teddy Patch. Calm resumed.

We soon settled into a routine of household life. Every morning my mum would come down to the kitchen and rake out some of the slag from the square, grey, coke-burning stove that heated our water. I never quite understood why it ran on a different fuel from the coal of the open fires elsewhere in the house; we had to have two concrete storage bunkers outside to separate them. Strange that I should recall a dirty, antiquated and slightly dilapidated boiler, except that I remember it was made by the Glow-worm brand. On the front it had a metal serial-number plate adorned with a logo which I immediately knew was a very anatomically incorrect caterpillar/ worm type thing with happy bulbous eyes and a shining light-bulb tail. Ever seen an indignant know-it-all 6-year-old? That was me.

Because we never really knew the house with its former grounds still intact, I never felt hard done by or resentful that we only had limited space to play. Anyway, we had the South Downs at our back and the ditch-lined meadows below. Within minutes we could be collecting sheep snails from the chalk hillsides, chasing clouded yellow butterflies across the clifftops, or picking out crabs and sea slaters from under the muddy rocks that edged the creek down at Tide Mills. So many worlds were our oysters, and there were pearls aplenty.