The wind blows across the sacred beacon hills of my childhood

I have been invited to interview Sir David Attenborough at Glyndebourne, for Countryfile Magazine. Even my children are impressed. The opera house has installed a wind turbine to provide it with electricity, and when it went to a public enquiry, David Attenborough spoke in support of the proposal. Friday was the official opening and press launch.

I grew up here; it was 6 miles from my house to the opera as the crow flies. I never went, though. Once, I was 10 or 12 maybe, I was waiting for the Newhaven train at Lewes Station and was surprised to see a train pull in with carriages entirely populated by passengers in black tie and ball gowns. Off to the opera I was told. I don’t think I entirely knew what opera was. But I knew every curve of the hills from my doorstep to the great sweep of the steep chalk scarp overlooking the Sussex Weald. This is, I think, one of the most beautiful landscapes on Earth, and it still makes me cry when I look out from the beacon hills above Firle. 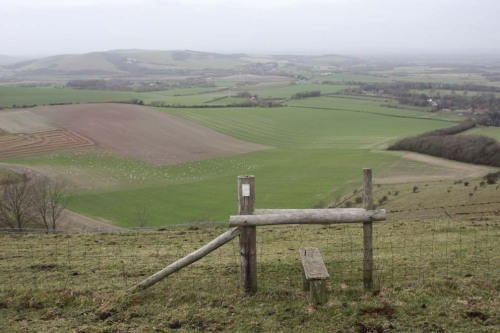 Who could resist stepping over this stile and being swept off on an adventure in the meadows and copses of the Sussex Weald?

It was to this chalk down I set out for, before the formalities of the day, and it made me cry again; partly it was the blistering wind in my face. No-one else was on the hills that day. There were plenty of sheep though. Looking out across the chequerboard of erratic fields and woods below I was reminded of those idyllic landscape paintings by A.E. Bestall that formed the endpapers of the Rupert Annuals in the 1950s and ’60s. I was always fascinated by this higgledy-piggledy jumble of hedgerows, streams, meadows, woods and coppice. It could only have been constructed, piecemeal, over the centuries; it’s so different to the structured geometric grid landscapes of East Anglia.

Looking back across the downs to Newhaven they were, still, very much as I remembered them. The steep edges of the undulating combes remain thankfully unploughed, browner against the crop fields and grazing meadows,  because of the rough flowery grassland and dotted gorse scrub. These were the haunts of all those fantastic chalk downland insects I found. Poverty Bottom and Devil’s Rest Bottom were the scenes of regular visits. My aunts used to giggle slightly at the mention of them — ‘bottom’, how rude.

As I strode up to the beacon top, from the small car park, I was reminded just how ancient was this place. A sunken lane gathers itself from the hill crest and winds down through Firle Plantation, and off to the village below. 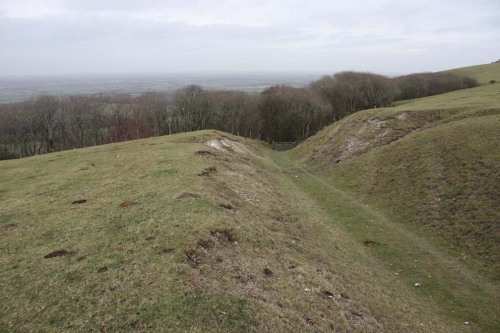 No machinery cut this way, just the passing foot traffic of — how long? Certainly many centuries, possibly several millennia.

There are several of these old pathways crossing the downs, but many have had their outward signs obliterated by widening and tarmac. At the beacon top itself is another ancient sign, a series of burial tumuli, long ago desecrated and dug over, but still visible as an unnaturally undulating sward. The trigonometrical point is just off to one side, and in a modern echo of the mysterious earthworks a mole has been busy in the shallow topsoil. 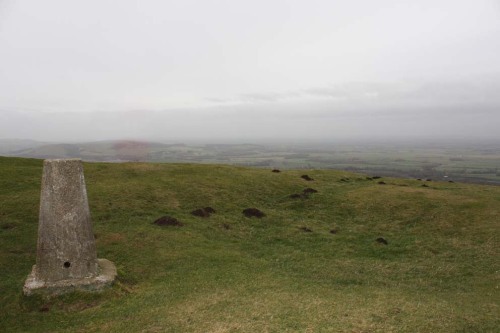 It's probably many years since this trig point was used for surveying.

After an hour of struggling against the wild wind I set off for the civilization of Glyndebourne. Back to the 21st century. I recorded the 15-minute interview on my iPhone. It all seemed to go very fast, I’m not sure I asked enough questions so thought I’d check what was said as I sat in my car in the staff car park. Hmmm. The interview would not play back. I kept pressing the ‘play’ button, but it stalled and the screen seized. My anxiety was mounting and I became aware of the whoosh whoosh whooshing of blood in my ears. The drive back was slightly nerve-wracking. At what point do I panic that the technology has failed me? Thankfully the whooshing in my brain had stopped. It wasn’t my rising blood pressure, but the sweep of the turbine’s sails I had heard through the trees. It was a very windy day.