Our Lego giraffe-necked weevil is a triumph

Buoyed up by the previous success of of our Lego head louse, 6-year-old and I have been working on some other insect constructions. The kitchen table could barely hold the mountain of bricks and the cats occasionally got out of hand skittering small bits under the fridge or behind the bin. I had to rescue Hagrid’s hair and beard from the mouth of the black one, and it is now rather unpleasantly slimy. Luckily, I don’t think that particular Lego piece will ever be needed for one of our entomological masterpieces. And, although I say it myself, masterpieces they are.

I wanted to do an earwig. I’m quite pleased with the result, but as my assistant pointed out, the yellow is a bit jarring on the eye. Lego need to commission a series of more insect-based chitinous colours; testaceous, ferrugineous and fuscous should do it.

Not much chance of this Forficula auricularia crawling into your ear.

Incidentally, I recently came across this report on ear-invading arthropods, which I thought was quite peculiar. Earwigs are not mentioned though. There is, however, a tale, not apocryphal I believe, that a ‘gentleman of the road’ visited the Natural History Museum in London (must have been back in the 1950s or 1960s maybe) expressly to offer personal testimony to assembled experts that, given the chance, earwigs would indeed invade the ear canal if you slept rough under a hedge.

Anyway, back to Lego. Next, we moved on to the sinister outlines of the death’s-head hawk. Not bad, although the sombre subtlety of the wing mottles do lose something in the translation to Lego pixelification.

For best effect, try squinting at this one.

What next? I thought bed-bug, maybe, or dung beetle. But 6-year-old had a better idea. He knew exactly where to go for the image, the Japanese edition of Extreme Insects, which has this wonderful creature on the cover: 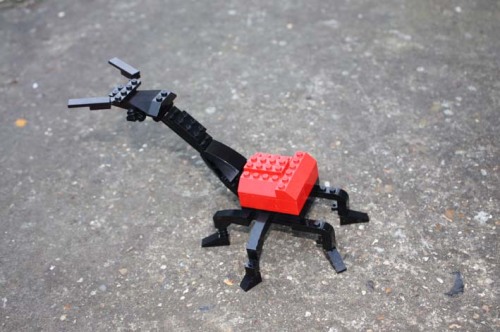 Our giraffe-necked weevil is a triumph.

The giraffe-necked weevil, Trachelophorus giraffa, suits everything about Lego: its bright colours, angular shapes and robotic form. If anything, our model looks more life-like than the living insect.

2 responses to “Our Lego giraffe-necked weevil is a triumph”