I don’t work in a museum but….

I don’t work in a museum, but I’ve been nominated (i.e. challenged) to write a blog for the Twitter museumweek hashtag. I nearly didn’t get nominated, you see I don’t actually work in a museum. I quite like museums though, and my study is pretty museum-like, what with shelves of old books and cabinets of old insect specimens. I could argue that it is a sort of museum in embryo, since most museums started out as the personal cabinets of curiosity of whoever founded them. I’m not expecting my disordered boxes to lead on to anything, but I like to think I am museumish in temperament, just as I am bookish. Also, I did work at a proper museum (The Horniman) on a (very) short-term contract a few years ago. With these credentials, I managed to convince a slightly reluctant Erica McAlister from London’s Natural History Museum (see her museumweek blog here) to give me the baton. So here goes.

1. Who are you and what do you blog about? I am an entomologist, and I blog about insects. That might not seem very enlightening, but because I don’t work in a museum my claimed status as an entomologist is rather telling. (In a similar vein, when does a bird-watcher become an ornithologist.) I’m not really an ‘amateur’ since I work on insects professionally, but my lack of attachment to any academic institution also means I have no real accredited professional status. The amateur/professional dichotomy is very blurred in natural history anyway. Many key experts in the field have always been amateurs in the sense that they study insects in their own time and at their own expense; I’ve always argued that a more useful distinction is between a field entomologist (that’s me, by the way, hello) and research entomologists (they’re mostly the ones in museums and universities). I used to try and get away with being a ‘consultant’ entomologist, but that just sounded pompous so I’ve gone back to being just a plain old entomologist, and I’m comfortable with that. I go off into the field, finding invertebrates for environmental surveys. And I sometimes write something about insects too. People pay me to do this. What a lark!

2. What blog piece did you enjoy writing the most? It’s got to be Lego.  I delight in the frivolity of this. That’s one of the pluses of being self-employed. 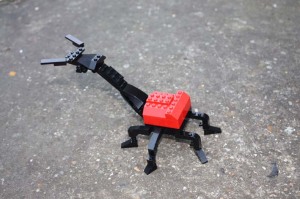 Our giraffe-necked weevil was a triumph.

3. What made you want to start a blog? This was partly a commercial decision; it’s in lieu of a website.  I’d been writing a garden wildlife blog for Gardeners’ World for some years so my personal blog complemented that too. All my work comes in through word of mouth, so both blogs (and Twitter now) at least give me a presence on the interweb.

4. What is the best thing about working in a museum? Academic studious calm. My short-term contract at the Horniman Museum was cataloguing, curating and studying Frederick Horniman’s original collection of exotic beetles and especially specimens of the Horniman beetle, Cyprolais hornimani (Bates, 1877). Though only a few hundred specimens (mainly large showy chafers, scarabs and longhorns) the historical links to some of the major zoological players of the day was fascinating. Bates (of Amazon fame) worked on the beetles, many of which had come from Christian mission stations in Cameroon to which Horniman had personal links; William Lucas Distant (who lived just around the corner from me in East Dulwich) named several bugs and the Horniman swallowtail butterfly (Papilio hornimani) from Tanzania where Horniman had commercial tea plantations. Some of the beetle specimens were collected by Alfred Russel Wallace, others were connected to the expedition sent out to find Livingstone, or came via William Watkins, a commercial insect trader who had a showroom stall at the Crystal Palace, then newly erected up on nearby Sydenham Heath. The few small cabinets of insect specimens provide a wonderful microcosm of colonial exploration, trade and empire in the Victorian era.

5. If time and money were not an issue, which museum in the world would you most like to visit? Without hesitation it would be the Lord Howe Island Museum. Lying in the South Pacific, between Australia and New Zealand, this remote speck of land must rank as one of the most beautiful places on Earth, and its wildlife, about which I know next to nothing I have to say, must be fascinating. Although there is no museum there, I’d also have to visit the isolated splinter of volcanic rock that is Ball’s Pyramid.

6. What is your earliest museum memory? When, as a 6-year-old, my family relocated from South Norwood (near Croydon) to Newhaven (Sussex), it did not take long for my father (from whom I get my interest in wildlife) to take me to the Booth Museum in Brighton. Although I was already firmly interested in insects I remember being transfixed by all the stuffed birds in glass cases — my first taste of a natural history museum.

7. If you could start up any new museum, which one would it be and why? I think the world needs a museum of etymology, with a large annex dedicated to punctuation, especially apostrophes. 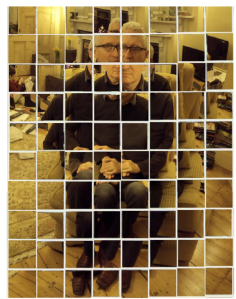 I couldn’t actually find one of those, so maybe this art gallery portrait by my daughter Lillian, might suffice.

9. If you could own a single object or specimen from a museum’s collections, which one would it be and why? It would either be the Alfred jewel in the Ashmolean, because of the delightful happenchance of its finding, ploughed up in a Somerset field, or the handsome blue john vase that used to sit on a table in Down House which, if memory serves, was stolen some time in the 1980s.

10. What is the most popular post on your blog? It seems to be my photo-record of the 2013 Coleoptera meeting  held, as coincidence would have it, in a museum, the Oxford University Museum of Natural History. I think people were looking for photographs of themselves.

11. What’s the oddest comment you have received in relation to a blog post? When I blogged about dissecting a rat at a primary school natural history club, I did not realize it would be seen by the head teacher. She later took me aside for a quiet word. I thought, perhaps, that there had been complaints from the children’s parents. On the contrary, the mixture of revulsion and fascination had been reported to parents favourably. I was told to keep up the good work.

Technically, Museum Week (24–30 March) finished some time ago, but blogs and the hashtag continue to trail on. I’m publishing this blog now, at the very tail end, but if I can nominate someone else, I’ll tack on a post-script here.