Make way, the arachno-ambassadors are coming

NOTE: If you’re a journalist and you’ve come across this article researching false widow spiders, there’s a useful fact box at the bottom of the page that will give you all the necessary information you need.

Five years ago I made mockery of the tabloid media for descending into the realms of garbled fantasy and blinkered ignorance. Schools were being closed because of infestations of false widow spiders and journalists the length of the country were sharpening their ill-honed wits to sell more ill-informed guff to an unwitting public hungry for sensationalist claptrap.

It’s happening again. Despite 5 years of ever-improving scientific knowledge and a resurgent interest in the natural world amongst their teachers and pupils, schools are still being closed because of fears over spiders. Urgh.

This is the cause of all the angst — Steatoda nobilis, a noble creature sadly maligned by being called a ‘false widow’ to give it the sinister connotations of the distantly related black widows. And no, it did not bite me.

It started in London.

This from the Evening Standard.

This from the BBC.

But whose fears are being pandered to? I doubt it’s the pupils. It seems the disconnect between humans and nature is not just a case of children no longer playing in the countryside, it is that adults (in this case some teachers, school governors, education department executives, parents too maybe) are falling victim to ancient prejudices and silly stereotypes, and these are being reinforced by the failings of the usual clamorous tabloid inanity. The sooner Mary Colwell manages to get a GCSE in Natural History established, the better.

Buglife were quick to make their astonishment known by publishing a response that tried to counter the “radical and unnecessary overreaction“.

This is my response, and to help get the message across I recruited the willing helpers of Ivydale Primary School in south-east London. 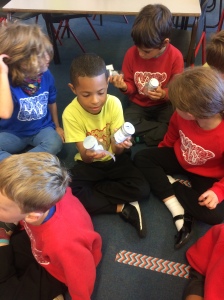 What’s in the jars? Why spiders of course. Everyone loves spiders.

Not all spiders are dark and sinister bundles of threat and danger. What if they were are prettily coloured as butterflies?

Colouring in the spider also gets across the subliminal message that they have eight legs, mostly eight eyes, and only teeny-tiny jaws.

At the beginning of the lesson some pupils claimed to be frightened of spiders. Well that all changed.

Next up — produce powerpoint presentations on why spiders are our friends. It wasn’t long before they were googling ‘cute spider pictures’ or ‘how many flies does a spider eat in a year?’ or ‘how many species of spider are there?’ 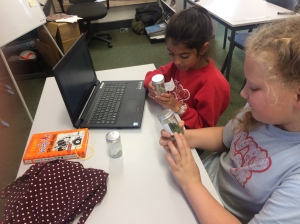 The head teacher Helen Ingham came in to see how we were getting on. I think she was pleased that none of her pupils had been traumatized, or bitten. 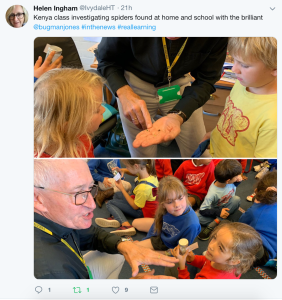 And no complaints from parents, either.

So now the serious part. What did the pupils of Ivydale learn? Here are some important facts: